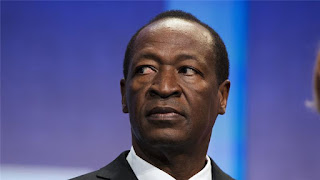 
It's official: Blaise Compaoré, former President of Burkina Faso is Ivorian. His naturalization decree, signed by the hand of President Alassane Ouattara, is dated November 2014, only a month after the fall of the former president. This decree was published in the Official Journal in January. The former president of Burkina Faso went into exile in Ivory Coast since he was ousted. Blaise Compaore is the subject of an international arrest warrant for his alleged involvement in the death of the former head of state Thomas Sankara "African Che Guevara". He therefore should escape justice because he can not be extradited.
Decree number 2014-701 makes only twenty lines. Signed Ouattara, he soberly announced that following its request, Blaise Compaoré, born in 1951 in Ouagadougou, is a naturalized Ivorian. The following decree makes him, naturalization of François Compaoré, the brother of former President of Burkina Faso.
The texts are dated November 17, 2014, barely a fortnight after the fall of the former head of state and his exile in Abidjan. But they came into force the day after their publication on 18 January.
These naturalization thus involved only one month after the issuance of an international arrest warrant by the justice of Burkina Faso against the former president. He is indicted for his alleged role in the assassination of former President of Burkina Faso Thomas Sankara in 1987 in a coup that brought Compaore to power. In addition, he is involved in the attack against state security, complicity in murder and complicity corpse concealment.
The Ivorian authorities do not wish to comment on the report. "This is a strictly personal matter" reacts a source.Blaise Compaore therefore should escape justice in the country he led for many years. Given the friendship between Compaore and Ouattara extradition seemed unlikely after naturalization, it is even less."Lamentable"In any case, the new Complaints in Ouagadougou. While some supporters of former President see no disadvantage, others against his opponents, qualify as an act "shameful" the one who ruled Burkina Faso for 27 years.Pascal Zaida, executive secretary of the popular youth movement, a movement that had supported the draft referendum advocated by supporters of the former president, it will be difficult for Blaise Compaoré to appear before a two-speed justice. "We believe that from a legal point of view, this is normal, there may be a national, it is not prohibited. Now you know that we are in a country in transition, there was justice of the victors, and it is this justice that prevails today. If the current authorities can guarantee him a fair and impartial justice, I do not see why it will not come reply. But cons, if it is to still make the justice of the victors, it is of course right to take Ivorian nationality. "The country's stability remains the priorityWhen looking at the conditions for naturalization in Ivorian law, one realizes that there is still a term or condition that Blaise Compaore, nor his brother, filledOn the other side, the movements that led the fight against the regime of Blaise Compaoré, say they are saddened by the decision of former President of Burkina Faso take refuge under another nationality. "In a word, as in a thousand, that's just pathetic. He did it to escape the justice of his country, because he knows that Ivory Coast does not extradite its nationals. But this is a terrible shame. It brings shame on himself and on all those who are related to him, "says Ismael Diallo, coordinator of  "Front de renforcement de la citoyenneté".Unless he gives up the Burkinabe nationality, says Ismael Diallo, Blaise Compaoré "will not forever escape the justice of his country."But in Ouagadougou, the emergency is elsewhere. The important thing for the stability of the country  is mainly to neutralize the former members of the former Presidential Security Regiment , Alpha Barry said Monday during his visit to Abidjan. After the extradition of Cowpea Moussa, considered one of the faithful of Blaise Compaoré. The Burkinabe Minister of Foreign Affairs assured Alassane Ouattara pledged to help Burkina Faso to arrest ex-soldiers of the RSP.
TCN
Posted by Unknown at 11:30 PM