The 19-year-old goalkeeper of Gambia's national women's football team has drowned in the Mediterranean trying to reach Europe.
Fatim Jawara was on board a boat that ran into trouble last month while crossing from Libya to Europe, the country's football federation says.
Her family confirmed news of her death, according to association president Lamin Kaba Bajo.
Many of the undocumented migrants who arrive in Italy are Gambians.
The Gambia's President Yahya Jammeh has been accused of intimidating the opposition - charges he denies.

Jawara made her debut with the national women's side a year ago, after playing in the junior team.
"She will be remembered for saving a penalty kick in a friendly encounter involving the national soccer team and the Glasgow Girls from Scotland," Mr Bajo told the AFP news agency. 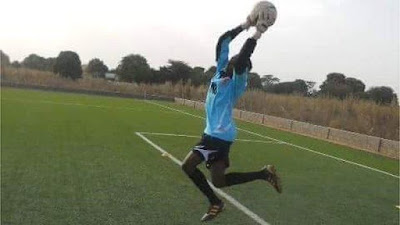 In a Facebook post, the federation said the manner in which she had died was "shocking".
The coach of the Red Scorpions, a local team she played in, described Fatim as a very lovely person who always smiled.
Chorro Mbega told the BBC's Focus on Africa programme that Jawara was a member of the squad that represented the Gambia in the 2012 under-17 World Cup in Azerbaijan, having first joined the team in 2009.
"Fati was a player who can play anywhere on the field. I'm really sad about this because she fought so much to be number one," Ms Mbega said.
She said she was not aware of Jawara being frustrated but added that Red Scorpion players were not paid salaries.
More than 4,200 migrants fleeing conflict and poverty have died or gone missing in the Mediterranean this year, figures from the International Organization for Migration (IOM) show.

Fatim Jawara's absence was nationally noticed when The Gambia national female team was schedule to play Senegalese club Casa Sports during celebrations to mark a girls football festival recently.
She played for local club Red Scorpions FC in Serekunda town, just outside Banjul, where she made her way to being first-choice goalkeeper, leading to her selection for the national team.
Her death in the Mediterranean has shocked Gambians and brings back the issue of illegal migration facing the country into a shaper focus.
Rumours started flying that Fatim had gone on the "Back Way", the now famous name for the boat journey across the Mediterranean to Italy, according to Red Scorpions captain Fatu Fatty.
"A few days later we confirmed from her family that an agent had contacted them to say Fatim was among those on the boat that capsized," Ms Fatty explained in tears."She was everyone's friend in the team. Jovial and funny to an extreme," Ms Fatty said.
A Gambia Football Federation official noted she was not the first footballer to have suffered such a fate but she was one of the most high-profile to have died this way.