What difference will Obama's plan to bring power to Africa make? 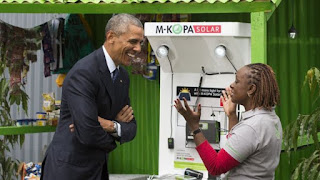 In February US President Barack Obama signed an agreement to bring electricity to 50 million people in sub-Saharan Africa by 2020. Neil Ford asks, even if this is possible, how many will still be left in the dark?
Perhaps the most remarkable things about the Electrify Africa Act of 2015 are that it commits the US to increased foreign aid at a time of economic uncertainty and cuts through sharp political divisions.
The Republican chairman of the House Foreign Affairs Committee, Ed Royce, worked with Democrat Eliot Engel for two years to drive the bill through Congress.
The act commits the US government to supporting President Obama's Power Africa initiative. Although headlined as a $50bn (£36bn) scheme, the US authorities will contribute just $7bn.
Other governments, development agencies and private sector companies are expected to provide the remainder in public-private partnerships.
This will be difficult to achieve during a global economic downturn.
Even if it succeeds in its aim of bringing electricity to 50 million Africans by 2020, more than 10 times that number will still be without power.
So the Power Africa initiative is not a magic bullet, but it has at least highlighted Africa's power supply problems.

It is easy to take electricity for granted.
Most African homes lack fridges and electric cookers but even a single electric light bulb can bring security and allow children to do their homework after dark.
Mobile phones encourage economic growth but the lack of electricity makes recharging them yet another hurdle to be cleared.
According to the latest World Bank data, 35% of sub-Saharan Africans have no access to electricity.
This is a far lower figure than in any other region.


The next lowest rate is 22% for South Asia, while all five North African countries claim 100% coverage.
Most Africans use wood and kerosene for fuel, causing deforestation and thousands of fatal accidents every year.
The 35% figure masks huge variations, with electrification rates ranging from 5% in South Sudan up to 100% in Mauritius.
Connection rates in rural areas are typically worse than 10%.
Most of those with electricity at home live in cities, supplied by grids that were developed in colonial times but which have failed to expand with urban growth.

Even many of those connected to the grid suffer from unreliable supplies.
So those who can afford them, buy their own expensive diesel fired generators.
While South Africa relies on coal-fired plants, most African countries depend on large hydro schemes to generate electricity.
Yet unreliable rainfall means that hydroelectric production varies even during a good year and is even worse - as at present - during an El Nino event.
The main problem is a lack of revenue.
Most consumers are unable to afford to pay a commercial rate for electricity.
This prevents power utilities from earning enough money to pay for new generation, transmission and distribution infrastructure; generation capacity to produce electricity; transmission to move it across big distances; and distribution to get it into people's homes and businesses.
Either people need to become richer, or power needs to be cheaper.
Luckily, a solution may be at hand.
The price of photovoltaic (PV) solar power panels is falling, while solar cells are becoming more efficient, so PV is becoming a cost-effective option.
Such off-grid solutions avoid the need for expensive transmission and distribution infrastructure.

Power Africa is already supporting very small-scale solar PV.
It has awarded part-funding to 28 off-grid projects, along with the technical support that small-scale developers often lack.
Many more will now follow suit.


Most of these projects involve solar PV or biomass, which involves using agricultural waste as a power generation feedstock.
Power Africa describes the first kWh people gain access to as the "the most valuable" because it provides at least a single source of electric light and the ability to charge mobile phones and radios.
With its commitment to providing "cleaner power generation", many of the on-grid ventures backed by Power Africa also involve renewable energy.
In some cases, it is directly funding generation projects, such as the 152 MW Sarreole wind farm in Senegal.
More often, it will supply technical support and dedicated advisors.
It has already helped Ghana to tap its newly discovered gas reserves for thermal power production by providing regulatory advice.
New projects will be identified as more of the funding is made available.
It may be that a single grand scheme cannot solve Africa's power problems but Power Africa can help provide local solutions, one at a time.
Posted by Unknown at 2:55 PM