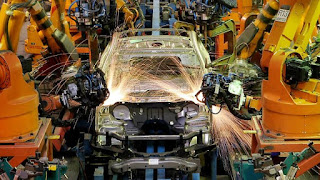 In about a year , Cameroon will be able to assemble cars for local consumption and sales in the Central Africa and African markets
Government encourages this initiative as a means of ensuring the quality if cars that ply the roads in Cameroon.
The Minister of Mines,Industries and Technological Development, Ernest Gbwaboubou who visited the construction site this Thursday 13th October 2016 noted with satisfaction the level of adavancement of work at the site.
Techinicians from Matgenie,the company carrying out the project updated the Minister on its execution rate.
That first phase expected to be delivered within a four month time frame has already witnessed an eight per cent execution rate.
They however contented that, heavy rains and the late arrival of funds slow down the process.
It is worthnoting that the 27 hectare car assembly factory has been set up in Bonaberi by the Indian Subsidairy, Cameroon Automobile Industry Company,CAIC.
The government and CAIC signed the deal for projects in Douala and Kribi on 11th June 2015
CRTV
Posted by Unknown at 11:13 AM