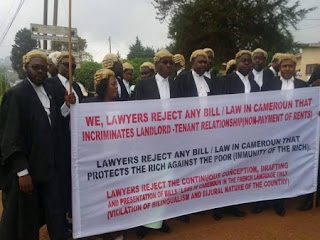 Cameroon common law lawyers have ‘unanimously agreed’ to extend their work boycott for another week beginning Monday.
The lawyers have been on strike since October 11, protesting against what they termed the government's disregard for the common law.
So far, the government has maintained a deaf ear to their grievances.
Our demands
In a statement issued late Saturday, the about 1,000-member disgruntled Associations of Cameroon Common Law Lawyers noted ‘with regret’ that the government had not yielded to their demands after they downed their tools for four days. 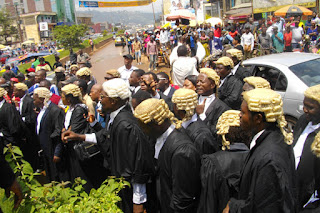 “We note with regret that the Government instead of responding to our demands is still employing its traditional policy of divide and rule. Consequently, we call on our members to remain resolute, determined, steadfast and focus and not to lend themselves to any Government manipulation,” read the statement signed by four representatives of the association.
Posted by Unknown at 11:32 AM