Police have charged three men in the fatal shooting of Trinity Gay, the daughter of US track athlete Tyson Gay.
Trinity Gay, 15, died after being shot in the neck amid an exchange of gunfire between two parked vehicles at a restaurant in Lexington, Kentucky.
Police do not believe Trinity was in either of the vehicles involved in the early Sunday morning shootout.
Chazerae Taylor, 38, and his 19-year-old son D'Markeo, face charges for wanton endangerment 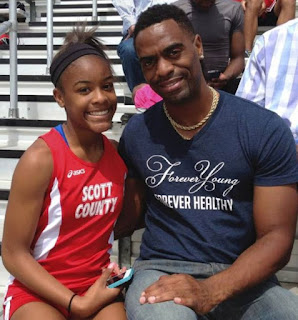 Another man, Dvonta Middlebrooks, 21, was charged with wanton endangerment and possession of a firearm by a convicted felon.
All three men allegedly fired multiple shots during the incident.
Witnesses reported an exchange of gunfire between two vehicles, a grey Dodge Charger and a dark-coloured sports car with tinted windows, at 0400 local time (0800GMT) on Sunday.
Trinity was pronounced dead less than an hour later at the University of Kentucky Chandler Hospital.
Another man was questioned by police but has not been charged, police said.
The three men are scheduled to be appear at the Fayette District court later on Monday.

Trinity was a talented sprinter at her local high school.
She placed in the top five for several events in the Kentucky state competitions.
"She was a beautiful person, very outgoing, athletic, always wanting to accomplish something," Debra Conley, Trinity's grandmother, told the Lexington Herald-Leader newspaper.
"She even said that since her father wasn't able to win his gold medal that she would win it for him," she said, adding that Trinity hoped to go to university to become a plastic surgeon.
Kentucky High School Athletic Association Commissioner Julian Tackett tweeted that he was "shocked to hear of death of Trinity Gay. A life of such potential cut so tragically short."
USA Track and Field have also tweeted their condolences.

Her father, Tyson Gay, is the joint second-fastest 100m runner of all time, behind Usain Bolt.
He participated in the last three summer Olympic games and was part of the US 100m relay team at the Rio Olympics.
He won a silver for the 4x100 meter relay in London 2012, but that medal was stripped when he tested positive in 2013 for a prohibited substance and was banned from competition for a year.