AU Will Send Observers to Help With Election Appeal in Gabon 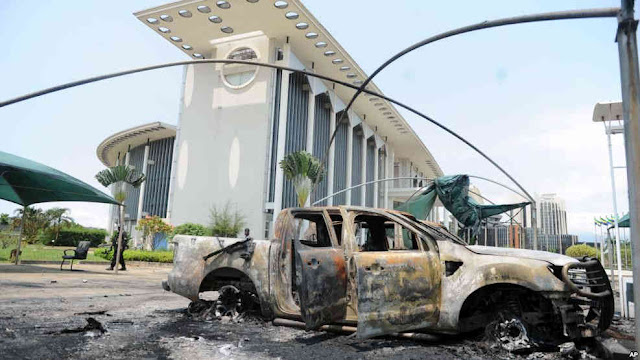 Burned cars are seen outside a government building, following an election protest in Libreville, Gabon, Sept. 1, 2016

LIBREVILLE, GABON —  The African Union says it plans to send observers to help Gabon's Constitutional Court with a legal complaint lodged by opposition leader Jean Ping, who accuses President Ali Bongo of cheating to secure victory in an election last month.
The dispute has led to riots that killed at least six people and brought unwelcome international scrutiny for Bongo, whose family has ruled the central African nation member for nearly 50 years.
Ping, who officially lost by fewer than 6,000 votes, last week applied to the court to authorize a recount in Haut-Ogooue province, Bongo's stronghold, where the president won 95 percent of the vote on a 99.9 percent turnout.
The Peace and Security Council of the African Union requested that its executive branch deploy observers from other French-speaking African countries "to assist the Constitutional Court of Gabon," it said in a statement late Tuesday.
The European Union, which sent an official observation team to the election and has cited anomalies in the poll results from Haut-Ogooue province, will maintain observers in the country.
It was not clear what level of access observers would have to the internal deliberations of the court, which is due to decide on the recount by September 23.
Ping says he has no faith in the judicial body because of its ties to the Bongo family. The head of the court, Marie-Madeleine Mborantsuo, was the longtime mistress of Ali Bongo's father, Omar Bongo, who ruled for 41 years.
Ali Bongo's opponents complained to the court after he won his first term in 2009, and the court upheld his victory following a recount.
The government has stressed that the court is neutral and also accused Ping's supporters of irregularities in the polls.
Former colonial ruler France, which has a military base in Gabon and a large stake in the nation's oil sector, has urged the court to examine the opposition's complaint transparently and impartially. It has ruled out intervening militarily in the dispute, as it has done previously in parts of Africa.