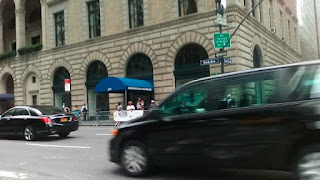 Paul Biya's arrival in New York - 18/09/2016
There was no crowd for Paul Biya and his entourage on arrival at their hotel in New York in the USA, early evening of yesterday Sunday, September 18, 2016.

The call for a mobilization launched by the Permanent Representative Ambassador of Cameroon to the United Nations in New York, did not get a favorable response. He had invited members of the Cameroonian Community of New York and its surroundings, to come in large numbers and warmly welcome Cameroon's presidential couple. Finally, according to our sources, only twenty people mostly militants of the CPDM, were present. 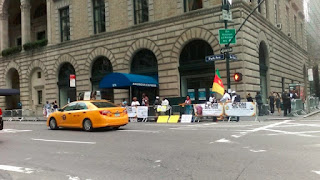 In the contrary, various strands of opposition to the Yaounde regime have  announce demonstrations tomorrow Tuesday, September 20, 2016 in front of the UN headquarters in New York to demand the departure of Paul Biya in power. 83 years old, the successor of the late Ahmadou Ahidjo has ruled Cameroon for 34 years. One of the longest reigns in power and some Cameroonians think it's disadvantageous for the country's prosperity.
Leaving Yaounde Friday, September 16, 2016, Paul Biya arrived in the United States of America to take part in the 71st session of the United Nations General Assembly. This session opened today Monday 19 September and will be closed on Monday, September 26, 2016. Cameroon's presidential couple is among the guests at the welcome reception offered in the morning of Tuesday 20 September, the UN Secretary General, Ban Ki-moon and his wife.
During this day, 20 September, Paul Biya will attend the opening of the general debate and a summit on refugees organized by US President Barack Obama. The Cameroonian Head of State will take himself over to the UN forum, Thursday, September 22, 2016.