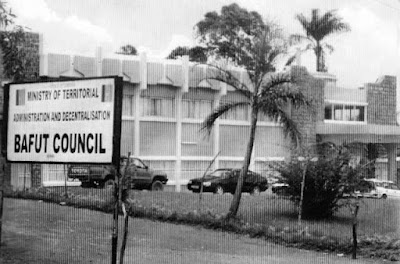 Taka Babila Cletus abandoned his job since March 2016, leaving the Council with a huge deficit.
Abongwa Che Fru was appointed Municipal Treasurer of Bafut Council in Mezam Division of the North West Region by Order No. 00000086/A/MINATD/MINFI of April 28, 2016. He replaced Taka Babila Cletus who allegedly fled since March 2016, leaving the Council with a deficit of 15.5 million FCFA for the period January 8, 2015 to March 4, 2016.
The missing amount was revealed during the mid-term evaluation of the Council. Mayor Langsi Abel revealed that the absence of a Municipal Treasurer caused great losses in revenue collection. The situation also hampered the collection of market fees, park access fee, council stamp duties and proceeds from quarry products. The consequence was the poor rate of the execution of projects.
It emerged from the session that out of the 572,576,803 FCFA budgeted, barely 170,324,547 FCFA was collected, giving 29.7 per cent. Local revenue collection was 29,645,380 FCFA. Expenditure execution from January 1-June 30, 2016, was 131,911,752 FCFA, with recurrent expenditure amounting to 78,234,203 FCFA, giving 59.3 per cent. Investment expenditure stood at 53,677,547 FCFA or 40.70 per cent of total expenditure. Bafut Council overstretched to execute projects, amongst which was the acquisition of a standby generator, construction of culverts, grading of the Agyati-Ntahkukife, Mbehbali Mankaha road, etc.
The council also started work on phase three of the municipal stadium, offered holiday jobs to 270 students, equipped the Mforya Integrated Health Centre and rehabilitated the Akofunguba Health Centre. Meanwhile, Phase Three of PNDP projects in the North West Region provides about 77 million FCFA for updating the development plan of Bafut municipality, carrying out feasibility studies and executing micro-projects.