President Muhammadu Buhari has reiterated that Nigeria as at now is a broken country that is affected by an economic downturn, hence the resolve by his government to diversify the economy. 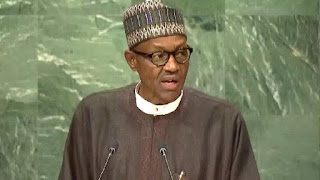 Buhari was delivering his address at the ongoing United Nations General Assembly session in New York.


"We continue to combat terrorism based on rules of engagement. With the federal government employing judicial tools to investigate human rights violations".

Africa’s most populous nation is battling three main issues, corruption, security and economy, the pillars president Buhari rode on to win the 2015 elections.
On the part of security, Buhari stated that ‘‘Nigeria had made remarkable progress in our resolve to defeat Boko Haram.’‘ The Nigerians army continues their counter insurgency against the group that had compromised security across most parts of the country’s north.
Beside Boko Haram, the army has also turned its attention to the militancy in the oil rich Niger Delta region, where attacks on oil installations continue to affect the output of oil production.
“We continue to combat terrorism based on rules of engagement. With the federal government employing judicial tools to investigate human rights violations,” Buhari added.
He also touched on the recovery of illicit financial assets stating that recovered funds were being channeled into development of critical infrastructure for the country. ‘‘Our efforts in fighting corruption has yielded positive results,’‘ he added.
Nigeria, Africa’s second largest economy, officially entered a state of economic recession for the first time in over 20 years. This came after current figures revealed that the economy contracted for a second consecutive quarter.
According to the Nigeria Bureau of Statistics, the country’s Gross Domestic Product (GDP) contracted by 2.06% in the second quarter. The GDP shrunk by 0.36%.
A recession is a period of temporary economic decline during which trade and industrial activities are reduced, generally identified by a fall in GDP in two successive quarters.
The cause of the slump is believed largely to be as a result of the slump of oil prices on the world market. That situation has been worsened by renewed insurgency in the Niger Delta region, the attacks on oil installations continue to disrupt production of oil in the region.