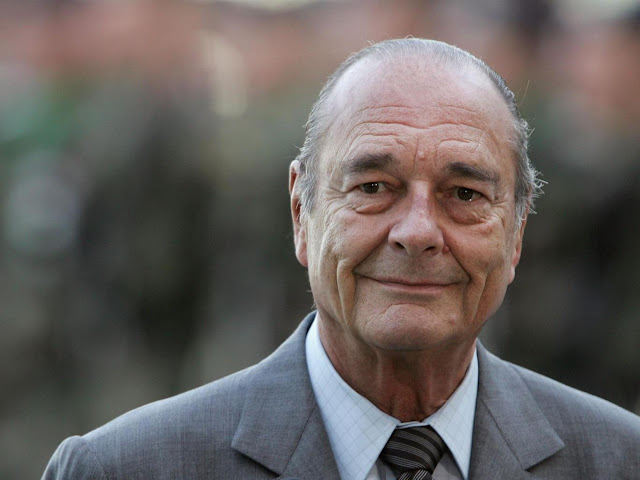 Jacques Chirac was rushed to hospital with a lung infection on Sunday, in the latest of a series of health scares to afflict the former French president.
Mr Chirac, who led France for two presidential terms between 1995 to 2007,  is expected to “remain in hospital for the next few days,” Frédéric Salat-Baroux, his son-in-law, said.
Mr Chirac,  83, was holidaying in Morocco when he fell ill and reportedly cut short his stay there by several days. He and his entourage were flown back to Paris in two jets provided by the King of Morocco, Mohammed VI.
The former center-Right president, who is best remembered abroad for his staunch opposition to the US-led invasion of Iraq, has suffered a string of health problems and has rarely been seen in public in recent years.
He suffered a minor stroke during his second term in office in 2005 that left him weakened. The popular former president also reportedly suffers from a degenerative neurological disorder.
He spent two weeks in hospital in December last year, suffering from what his family described as “fatigue”.
In 2011, his deteriorating health led prosecutors to spare him the embarrassment of appearing in court during a trial for corruption.
He was convicted and given a two year suspended sentence for colluding in the creation of fake jobs for party workers when he was the mayor of Paris.
Despite the conviction, Mr Chirac is seen as one of France’s best-loved elder statesmen.
His entourage said his health had improved in recent weeks. Nicolas Sarkozy, the former president who served as interior minister under Mr Chirac, wished him “a speedy recovery” on Twitter.
Mr Sarkozy hopes to return to power in next year’s election, but must first beat another presidential hopeful, Alain Juppé, who was Mr Chirac’s prime minister, in a centre-Right primary in November.
Mr Juppé said on Twitter: “I think affectionately of Jacques Chirac. I hope with all my heart that he overcomes his illness and wish him  a very quick recovery.”
Mr Juppé was convicted of abuse of public funds in connection with the “ghost jobs” affair.
He was given a 14-month suspended sentence and disqualified from holding public office for a year.
Like Mr Chirac, Mr Juppé appears to have been forgiven by the French public. He is now one of France’s most popular politicians and the favourite to win the presidential nomination.
Posted by Unknown at 3:51 PM