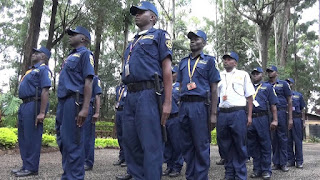 YAOUNDE —  Cameroon’s government says it is clamping down on unlicensed private security firms in an effort to improve public safety and enforce regulations.
It plans to close all but nine of the country’s nearly 50 private companies. The sector's numbers have risen sharply in the two years since the militant group Boko Haram began carrying out attacks in the country’s northern region. Cameroon has an estimated 70,000 private security guards, compared with about 15,000 armed policemen.
The closings could leave tens of thousands of people jobless, authorities say, but they contend the sector has become rife with crime.
Criminal suspects are all too common among the ranks of private security guards, according to Senior Police Commissioner Ossomba Ansleme. He said two guards had been taken into custody as suspects in a rape case being investigated this week in the capital.
Police reportedly still are hunting for five people suspected of attacking Chinese gold miners last week in the town of Ngaoundere. Authorities killed one alleged assailant – and then realized the dead man, and possibly his five peers, had been hired as guards by the victims. 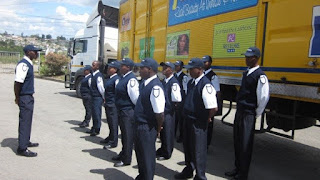 More regulation supported
Kuma Emmanuel, who owns a private security firm, doesn’t dispute the need for more regulation.
"We have companies that … just get a truck, open up and then young guys come in," he said. Such firms merely "dress them up as security guards."
A poorly trained guard, he added, "does not know where his powers begin and where his powers end. Obviously, there is a problem. Most of these workers that you see you see putting on uniforms – let me say 80 percent of them have not been trained."
But government inefficiency also was faulted. Some owners said it could take authorities years to process applications for security businesses.
Promoting public safety
The man handling the shutdowns is Issanda Issanda Alain Solomon, the Ministry of Territorial Administration’s director of political affairs. He said public safety is the top concern.
He said any well-trained guards losing their jobs because of the closings will find new opportunities with authorized private security companies. The law permits licensed firms to recruit up to 5,000 guards, yet most have 2,000 or fewer. 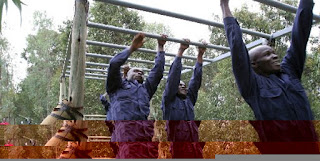 Issanda Issanda said guards for authorized security companies should wear yellow uniforms.
He dismissed local media criticism that the proliferation of private firms reflected the government’s failure to provide adequate security.
In June, the government reported that at least 1,400 people have died in Boko Haram attacks and related fighting. The actual figure is likely higher, as many people die in the bush and are not accounted for.